“Decentralisation is the empowerment of people through the empowerment of their local governments”, was one of the main definitions on decentralisation during the training course “Decentralisation, Democratisation and Development”. The ’DDD’ course, organised between 19 – 30 March 2012, took place in The Hague, The Netherlands. The group of participants had a diverse background with people from India, Pakistan, Myanmar, Tanzania and Zambia. The course aimed to increase knowledge, share experiences and gain new insights on the course topics.

During the training course, various topics were covered with the three D’s as core. Multiple national and international experts from Municipalities (Amsterdam/Vlaardingen), the association of Netherlands Municipalities (VNG), NGO’s and the Wageningen Centre for Development Innovation were involved. The course was facilitated by Emmely Benschop and Nienke Vermeulen, programme managers at The Hague Academy of Local Governance.

The first week covered the three D’s with a helicopter view. Several experts spoke about the principles and context of decentralisation (political, administrative and fiscal) and democratisation. Furthermore, a field visit was scheduled, organised by ProDemos (‘House of Democracy’), a organisation which aims to increase the knowledge of Dutch democracy. The field visit included a visit to the Dutch Senate, the House of Representatives and the ‘Knights hall’.

The second week focused more in-depth on various topics under the umbrella of the three D’s. Topics like multi actor processes, local economic development (including an afternoon field visit in cooperation with City Mondial), the role of local governments in achieving the Millenium Development Goals and citizen participation & accountability. On Friday March 30th , the last day of the two week course, the group focused on managing change and looking into the back home action plans which elaborated several ambitious plans by the participants. There was an great deal of interaction which helped to share lots of experiences and cases.

After two intense and sunny weeks in the Netherlands, the participants finished their course with handing out each other’s certificate. One of the participants summarised: “It has given me a different understanding on how governance works in different regions and areas”.

The Hague Academy would like to thank all the participants again for their participation and wishes them a successful implementation of their action plans! 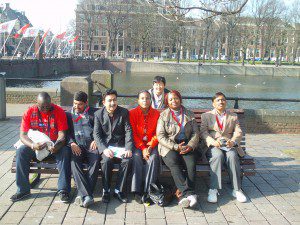