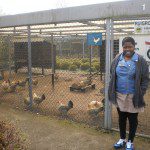 Doto Mgasa, a young talent from the Babati District Council (Tanzania) came to the Netherlands with a mission. Being a community development officer she is passionate about trying to relieve the people in her district from poverty. She submitted a feasible idea with her application to the Talent for Governance programme. And guess what? It was all about chicken!

Doto stated in her proposal that: “Most widows in Babati District are facing a great challenge on food security as most of them lost their husband and with them the source of daily bread; most of these families have at least 7 children who depend on the mother now for food and other basic needs. Furthermore,  the impact of climate change has resulted to shortage of rainfall that had a negative impact on agricultural produce.  Yet the production of local chicken is cheap to start with and its output can be seen quite soon. Also in the past the community has shown that local chicken rearing works in the Babati District”.

During the Talentprogramme in April,  Doto visited the municipality of Huizen. Among others, they arranged for her to visit a chicken farm and museum! Although the farm was fully automatized  and in that way very different than the small scale animal husbandry that the project of Doto envisions, she found it a great experience and she did pick up some valuable ideas to incorporate in the scheme in Babati.

After the short internship at the municipality in Huizen, doto also followed the two week training on Citizen Participation at The Hague Academy for Local Governance.  After her return home she will post regular updates on the online Talent network, about the progress of the chicken-project in Babati District Council!