In the period of 2012 to 2015, The Hague Academy was responsible for the design, delivery and monitoring and evaluation of 4 eight-day training courses on ‘Decentralisation’. These training courses were designed for senior civil servants charged with the development and implementation of decentralisation policies in the following countries: Albania, Bosnia-Hercegovina, Kosovo, Macedonia, Montenegro, Serbia, Turkey.

This training programme took place in the Netherlands and aimed to increase understanding of basic concepts of administrative, fiscal and political decentralisation, multilevel governance and accountability. Visits were paid to the Netherlands’ ministries of Home Affairs, the Dutch association of local authorities and the municipality of  The Hague. Attention was given to the European framework for Decentralisation, European regulations with an impact on regions and municipalities in Europe, EU-subsidies and institutions for cooperation between regional and local authorities in Europe. In addition, analytical skills were be practiced as well as working in teams, lobbying in Brussels and change management.

On completion of the training, participants:

This course is part of a larger programme (Matra Patrol) and consisted of eight courses in the field of Rule of Law, financed by the Netherlands´government. The aim of the Rule of Law-programme is to stimulate and support European integration by capacity building of government organisations in the target countries. 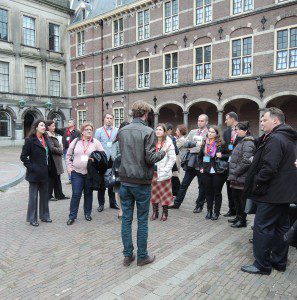 Participants of 2013 are visiting the Parliament buildings in The Hague.