After a year of political crisis and violence  in Burundi, talks are underway in Tanzania to find a solution to the political crisis. Burundian leaders have successfully negotiated political  crises in Arusha, Tanzania twice since 2000. Yet, now they’re back there again, hoping to resolve this latest phase of instability. Meanwhile, cases of violence on the ground continues.

Meanwhile in the Hague, staff from CARE offices in Burundi, South Sudan, Yemen, Afghanistan and Somalia attended training sessions on human rights, gender and conflict resolution, and exchanged lessons learned from the projects. Conflicts at national level have, just like in Burundi, have influenced local peacebuilding initiatives in all these countries. The local peace committees that CARE has been supporting for many years, proved to be a success. Especially because they were built on existing local structures and because women were involved in mediation and conflict resolution. But there are still many challenges. How to gain more support for the role of women in peacebuilding processes, especially from men? How to engage youth and create job opportunities as alternative for fighting? And how to improve cooperation with formal and informal local leaders?

Not only Burundi but also the other countries in which the participants work, are confronted with increasing violence and a rise of political tensions. These conflicts at national level also influence the local peacebuilding initiatives. Another question discussed during the event was therefore: can we scale up the peacebuilding successful peacebuilding approach to the regional and national level? An interesting challenge to be further explored in future programmes.

The international learning event was one of the final activities under the ‘Peace Under Construction’- programme that The Hague Academy for Local Governance and CARE Netherlands have been implementing since 2012. We will continue our cooperation in the new programme ‘Every Voice Counts’, that aims to foster inclusive governance and peacebuilding in Burundi, Rwanda, Sudan, Somalia, Afghanistan and Pakistan. 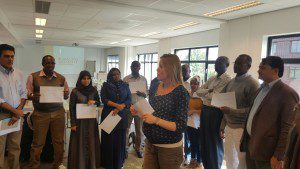 Ms. Nolles of CARE Netherlands is doing a recap exercise with the participants.