From unemployment to active citizens

Why do the Netherlands have one of the lowest youth unemployment numbers in the EU? What policies contribute to an effective fight against unemployment? How do we change the mindset from focusing on unemployment to creating more jobs? What can we learn from social security reforms? This and many other issues were covered during the training Matra South Social Affairs and Employment that was held in The Hague from 9 -13 September.

Senior civil servants and NGO reps from the MENA countries Jordan, Tunisia, Libya and Morocco worked intensively on their knowledge and skills of social affairs and employment issues. The programme included elements of the Netherlands social security and welfare system and employment policies, the exchange of experience between the different countries, study visits and active participation in improving skills.

One highlight of the programme was the challenge that the participants accepted to mount 22 loose nails on one single standing nail – a job impossible to fulfil at first sight, yet not impossible as it proved later. The trainer showed with this exercise that shifting the mindset to new ways of thinking might seem impossible at first, but with help of others and use of creativity, change is possible.

After a visit to The Netherlands Social Economic Council where the participants learned about the Dutch Poldermodel and long tradition of tripartite negotiation on key social issues between the government , employer and employees organisation, the participants had to bring these skills into practice themselves through the negotiation workshop. The had a tough task to reach an agreement against the backdrop of their different and sometimes opposing interests. The workshop was led by professional mediators who guided and evaluated the input of the participants.

A study visit to the Amsterdam Economic Board showed examples of the Dutch practice of how the city of Amsterdam tries to put itself on the map and uses various strategies to attract business and employment. The visit was rounded off by a canal cruise to relax and enjoy the beauty that  the city has to offer before continuing the hard work for the second part of the training in Tunis, that will start again on 7 October 2013. 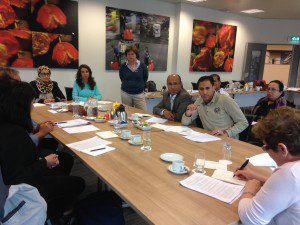