Gender Gaps Through the Globe

‘Gender Disparities’ have been a hot topic for the past few years. While several countries have been working very hard to close the Gender Gap, others still need to make much more effort towards this goal. In this context, the World Economic Forum has released earlier in October the ‘Global Gender Gap Report 2016’ which measures the magnitude of gender disparities and tracks their progress over time.

The analysis of data focused on 4 key areas: health, education, economy and politics. If you are interested to know how well your country is performing in closing the Gender Gap, you can download the report through the following link :

Furthermore, you have the opportunity to learn more about gender equality and in particularly in the (local) governance arena by participating in our ‘Gender Responsive Governance’ training course which will take place from 23 January until 7 February 2017 in the Hague, The Netherlands.

This training addresses practical tools and strategies to make government policies and programmes more responsive to the needs to women and men and looks at ways to increase the political & economic participation of women and their representation in government. Special attention is paid to role of women in conflict resolution and peacebuilding as guided by UN Security Council Resolution 1325.
The deadline for applications is 16 December 2016.

All that you need to know about this training course, including information about the content and the application procedure, can be found at: www.cms.thehagueacademy.com/genderresponsivegovernance 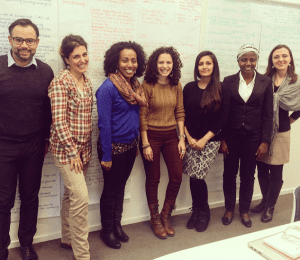 The participants of our gender training in 2016