Integrated urban planning is a modern planning approach that takes into account the complex nature of our urban environments. To achieve liveable, safe, and inclusive cities, we need the collaboration of different actors. Read more about the six key ingredients that make it happen.

Aerial Image of the Canberra, Australia. By: Mohit Kumar on Unsplash.

Today, more than half of the world’s population lives in urban areas. Although our cities share many of the same problems across the globe, like housing shortages and climate vulnerability, each is ultimately rooted in its context. Urban development projects around the world each tackle their own combination of challenges, with issues ranging from environmental sustainability to social equity and economic development that dictate new development.

Integrated urban development is a modern planning approach that takes into account the complex issues cities face today. They can be holistic and large-scale initiatives that involve multiple stakeholders in different sectors and at different levels. An integrated development approach is often the best suited to match a city’s or region’s compounding needs.

However, in an integrated approach, planners need to pay attention to a variety of details over an extended period of time, and this can be as complex as it sounds. So where do we start? How do we understand and build connections between issues and plan integrated actions? In our Urban Governance course, we discuss what we mean by integration in an urban planning context.

Key elements of an integrated approach

Integration in urban planning is the participatory and flexible management process where cities work across agencies, sectors, and even jurisdictions to tackle key planning challenges. Integration is important because it can improve the effectiveness, adequacy and efficiency of an urban project.

The following five elements are key to an integrated planning approach:

Another key element for a successful integrated approach is the identification and activation of thematic entry points. For example, a new mixed-use development, one that would include room for businesses, public spaces, and low-income housing would tackle many of the cross-cutting issues that the city faces at once, as it would necessarily take into account social inequalities, economic development, public health through improved public spaces, and environmental resilience through its design and perhaps building material. Another consideration would be public transport and how the new development feeds into the economic well-being of its region. Understanding these cross-cutting issues, a planner then seeks out relevant stakeholders and loops them in the process. 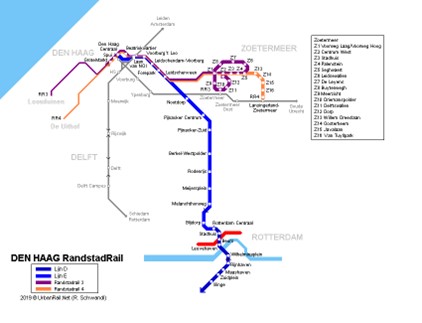 As an example, consider the case of The Netherlands Randstad Rail Network and Vinex, a national programme for city expansion, encouraging compact housing development along public transport lines. The governments of Rotterdam and The Hague agreed to set up a Randstad Rail Network to link both cities. Per the Vinex directive, they were encouraged to do so by linking housing developments along the way. Now, the majority of all development in the region between Rotterdam and The Hague has easy public transport access to both centres. The thematic entry point of this is housing and transportation, as well as economic development. Therefore, the administrative framework around this integrated urban project includes the ministry of transport, public works and water management, and the municipalities of Rotterdam and The Hague. Importantly, it was funded through central government subsidies, as well as housing corporations and other private sector entities that would benefit from the project.

From its characteristics to its planning and design, the project made sure to connect existing development (as it coincided with a new central station for Rotterdam, for example), and to take into account holistic needs to seek partnerships and funding. By addressing both the national spatial plan and the national housing plan, for example, it solidified institutional arrangements with the Dutch government to secure funding and support throughout its planning and implementation.

In Katwijk aan Zee – a small beach town to the north of The Hague -, we see an example of a different infrastructure project that takes on the holistic and multi-disciplinary approach that characterises integrated urban development. Being a small town in a small country, Katwijk aan Zee shares the same issue that many Dutch municipalities have: space. Several goals were combined into the design of this large infrastructure project: a) the need for protection against the sea; b) space for lacking car-parking infrastructure, and c) the protection of the dune-like landscape that characterises the town.

As a solution, planners came up with the following plan, through coordination at various levels with different interested groups: to build an underground parking garage, under the dunes, behind the dike that separates the town from the north sea.

The example of Katwijk aan Zee exemplifies one of the most important guiding principles of an integrated urban planning approach: multi-disciplinarity in drawing from different learnings, a willingness to engage and coordinate with multiple stakeholders, and striving for smart planning solutions that tackle many issues at once.

Are you interested to learn how an integrated urban planning approach works in practice and different examples around the world? Make sure to join our Urban Governance course.