Training in the middle of political tensions in Burundi

Elections are underway in Burundi. President Pierre Nkurunziza will run for a third term, a move many say violates the constitution as well as the terms of the peace accord that ended a brutal civil war which cost some 300,000 lives. More than 10.000 people in the north of the country have fled to Rwanda and the Democratic Republic of Congo due political intimidation and pre-election violence.

In the middle of this, our Programme manager Freddy Sahinguvu has just finished the last training in a series of three masterclasses on youth public leadership. 45 young women and men leaders were trained in Bujumbura. Freddy: “It was nice to see that the action plans they have been working on for the past 2,5 years are showing some progress. The challenge is still is how to sustain the results already booked. As a start, the participants created an umbrella organisation regrouping all action groups, and they made commitments for the rest of 2015”.

We are presently also training state and non-state actors in Burundi on extremely relevant topics in the current context: non-violent communication, mediation, negotiation and gender-based violence. The participants are parliamentarians from different political backgrounds and representatives from the local administration, police, justice sector and civil society.

In the coming years, we will continue to support the peacebuilding and decentralisation process, thanks to a just signed contract with UNDP Burundi for the implementation of several training workshops and a Train-the-Trainer programme. 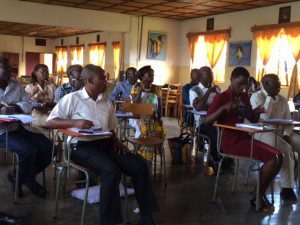 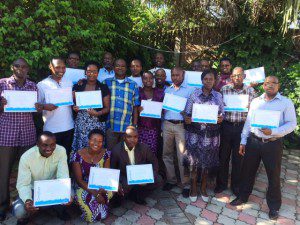