‘Without inclusive leadership, the rule of law cannot be implemented in Iraq.’

Project manager Kamaran Mohamad Palani at the Al-Mesalla Human Resources Development Centre in Erbil, Kurdistan is satisfied with how he has been able to implement his Back Home Action Plan (BHAP) after taking part in The Hague Academy’s Citizen Participation and Inclusive Governance course in May this year.

Prior to taking the course, Kamaran described the glaring need in Iraq for inclusive governance: ‘Without inclusive leadership, democratisation and the rule of law cannot be implemented in Iraq. The lack of legitimacy is at the heart of many Iraqi problems, and this is a result of the lack of participation. Many citizens have no access to decision making processes.’

Now back in Erbil, Kamaran is manager of the project called Preserving the Future: Strengthening Religious and Ethnic Minorities in Iraq.

One specific advocacy project in which Kamaran could apply what he learned in The Hague was directly related to the Christians who had fled from Mosul and are now internally displaced. In their haste most of these internally displaced people (IDP) had left behind or lost their identification, including their electronic voting card with biometric verification which also serves as an official ID in many government places. Arranging for a new voting card entailed high costs and bureaucratic red tape. With assistance from Heartland Alliance International, the project was successfully able to intervene on their behalf and it was able to convince the Nineveh Governorate Council to simplify the procedure so that the Christian IDPs could arrange for a new voting card.

Kamaran’s training gave him the tools he needed to meet directly with community representatives and people affected in these communities and he was also able to negotiate on their behalf with the government and relevant institutions.

The next training on citizen participation and inclusive governance will be held from 27 March to 7 April 2017. More information can be found at: www.cms.thehagueacademy.com\citizenparticipation 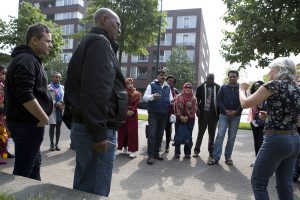 Kamaran (left in picture) and the training group visiting a project on citizen engagement at the neighbourhood level in Amsterdam.