Mohammed leads an awareness session on bullying and child rights.

With one person in 15 being a refugee, Jordan hosts one of the largest numbers of refugees per capita in the world. Currently, more than 657,000 Syrian refugees live in Jordan, most of them in urban areas outside refugee camps. Mohammed Al Zoabi is one of them.

At the service of the Syrian community

Mohammed Al Zoabi lives together with 134,000 Syrians in Irbid, one of the major cities of Jordan. He graduated as an English teacher in Syria, but due to labor restrictions in Jordan, he is not able to work in his former profession. Mohammed now works as a community facilitator for the Justice Centre for Legal Aid (JCLA), a local NGO in Jordan. Since many Syrians are not aware of their rights nor have sufficient knowledge about the Jordanian legal system, he works creating awareness among the Syrian community on topics like child rights, labour rights and domestic violence.

Training on Gender Based Violence and facilitation skills

Gender Based Violence (GBV) is an increasing problem among the Syrian refugee community. Due to displacement, traditional gender roles have shifted. This shift has been identified as one the factors contributing to increased GBV cases. With this in mind, The Hague Academy for Local Governance and the local organisation Mastery for business and training development (MBTD), organised a training focused on empowering 15 community facilitators to address GBV within their communities.

Mohammed took part in the train-the-trainer programme. As a result of the training, he not only gained more knowledge on GBV, but also acquired useful communication and facilitation skills. Mohammed now knows how to conduct conversations around GBV and show empathy to GBV survivors. He also applies more participatory techniques in his awareness raising sessions. 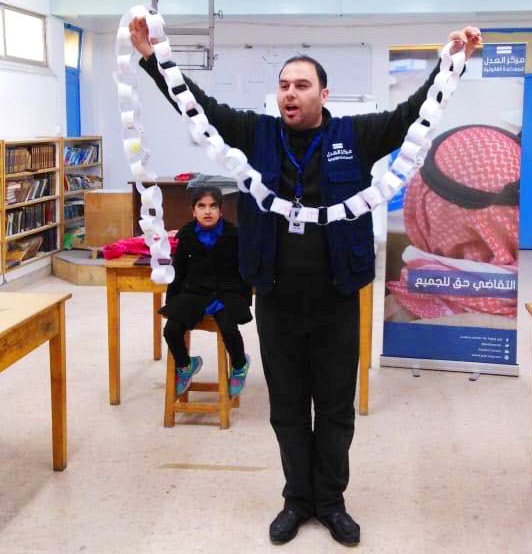 “I can see how participants appreciate it when I use different techniques like drawing, coloured cards, ice breakers and wrap-up sessions. I was not aware that these techniques could really help people to better understand and remember my message”.

With lockdown measures in place, cases of GBV significantly increased in the past months. Therefore, Mohammed has shifted his focus to online activities to raise awareness on domestic violence. Even though most of the awareness raising activities have been postponed, Mohammed and his team are now also focusing on families whose livelihood was affected by the lockdown measures, by helping them access national aid services.

*** This tailor-made-training was funded by the Netherlands Ministry of Foreign Affairs through a Nuffic grant of the Mena Scholarship Programme.