A call to defend democracy worldwide

“Those who fall asleep in a democracy, may wake up in a dictatorship”. This quote by the German historian Otto Gritschneder underlines that we cannot take democracy for granted. It needs our continuous attention. Especially in a world with one-third of the population living under authoritarian regimes, civic space shrinking in many democratic countries and anti-democratic, populist movements rising.

At the conference ‘Democracy under threat’, a manifest was presented by several Dutch NGOs, including The Hague Academy for Local Governance, to defend democracy and support democratic institutions and practices, both in the Netherlands and abroad. The manifest was presented to Thomas Zandstra, Head of Democracy at the Dutch Ministry of the Interior, and Dr Bahia Tahzib-Lie, Human Rights Ambassador at the Dutch Ministry of Foreign Affairs. 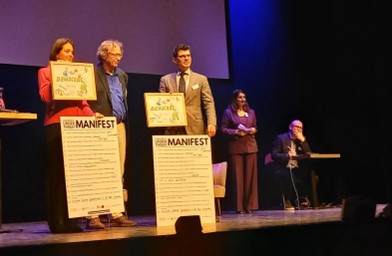 The manifest includes fourteen recommendations, amongst which a shift of resources from national to local and subnational levels to increase public accountability and responsiveness; promoting more direct democratic models of governance and participation; citizen-centred and inclusive reconstruction programmes for Ukraine; an increase of the budget for Eastern Europe, Caucasus and the Western Balkans; and more training for the new generation of politicians, public leaders and civil society activists, in particular for underrepresented groups.

The manifest contributes to the Dutch input at the second international Summit for Democracy taking place in Spring 2023. Other Dutch organisations that signed the document are the Netherlands Helsinki Committee, Foundation Max van der Stoel, Pax, Transparency International Nederland, Defend Democracy, and Meer Democratie. The full manifest can be found here:  “Democracy Manifesto – Our Call for Action!”.