In the Schilderswijk, one of the most multicultural neighbourhoods in the Netherlands, an online platform is one of the many initiatives to foster communal cohesion. It offers neighbourhood news, activities and information all in one place, and residents can share posts or requests for help. 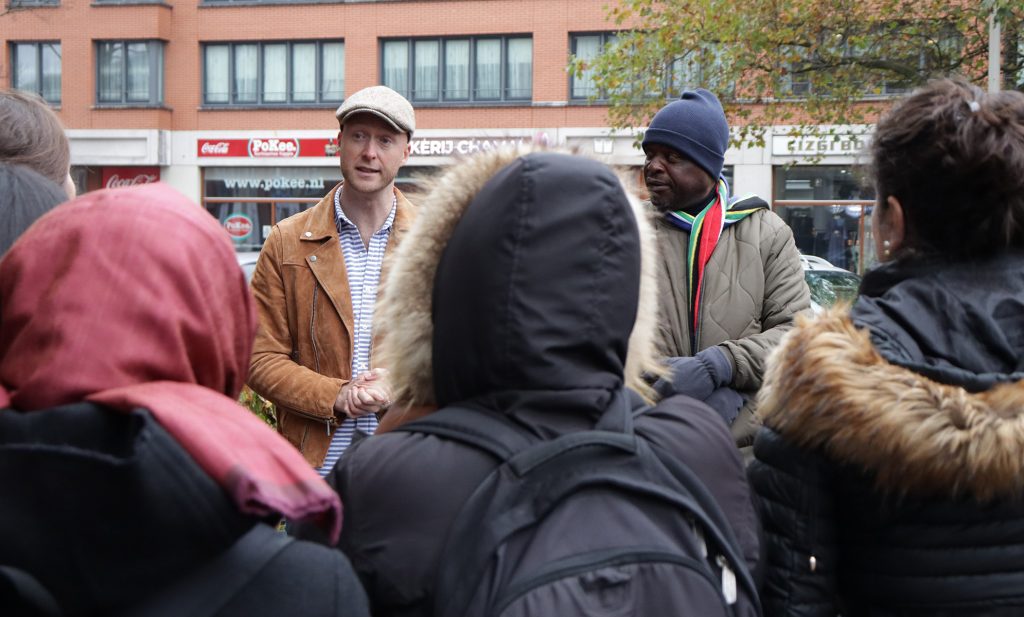 While many celebrate the neighbourhood’s multiculturality, others point to its negatives. The Schilderswijk is often portrayed in Dutch media as a hotbed for criminality and unrest. Its multicultural aspect, focused on one specific area of The Hague, is instead seen as a failure of integration by local authorities.

A recent study called the Schilderswijk a ‘super-diverse’ area, one symptomatic of globalisation where a plethora of religions, ethnicities, and nationalities come together in a single area. Also characteristic of such super-diverse areas is the disparity in class and wealth of their residents. Immigrants with vastly different means and economic potential come and go, while wealthy residents are able to find better opportunities elsewhere, less wealthy ones stay put. Indeed, the Schilderswijk does not retain many of its immigrant residents. In any given year, about 30% of the neighbourhood’s residents are new immigrants, while its population rises at a comparative rate to other Dutch neighbourhoods. The Schilderswijk, then, is like a revolving door of residents.

Lack of long-term retention has been argued to lower social cohesion in the neighbourhood, as locals who can potentially make connections with their local community or municipality are transplanted and make way for newer migrants who then start from scratch. At the same time, there is great potential for those now arriving in the Schilderswijk to find a multicultural sanctuary they could call home.

Aiming to target the Schilderswijk social cohesion issues, a local initiative called Shilderswijk.nl is bringing residents, entrepreneurs, and organisations in the neighbourhood together, online, and encouraging them to communicate in new ways. With support from the municipality of The Hague, they have established a platform on the website www.schilderwijk.nl that highlights local initiatives- a sort of depository of medical services, sports, cultural activities and neighbourly help. Their purpose is to help new and old residents find connections in the neighbourhood they would otherwise not have, giving those looking for roots an opportunity to establish them.

Thijs Moesker, founder of ComClose, has been working for 10 years to improve Schilderwijk’s sense of community cohesion. Thijs had previously attempted to establish an online platform that highlighted the neighbourhood’s activities, but he realised it did not meet people’s needs. In various interviews with community members, Com Close realised that residents wished for a more interactive website, one where they could share information themselves.

“Local news, contact details of organisations, activities and events are all in one place, and residents can also post and share information for free…. There’s a message board as well, so if someone needs help with doing groceries, or walking their dogs, they can get it through the website. All relevant information can now be found on just one interactive website.”

Schilderswijk.nl evolved to meet residents’ demand for a sense of connectivity, bringing people together and facilitating their acquaintance and interaction. Residents can then build substantial social networks and support systems in their neighbourhood. The website stands to help new residents the most, for instance, those that need language help and support networks in traversing Dutch bureaucracy.

As Thijs explains: “this social capital and safety are important to residents from an often social-economic disadvantageous position within the society of The Hague. They need this, in a practical manner, to support each other, financially or with services.”

Both the website and the welcoming spirit of the Schilderswijk have proven themselves in the recent Ukraine crisis. HVV De Zorg, a Dutch clinic, made one of its locations in the Schilderswijk available to Ukrainian refugees. While still offering health services themselves, they received open support from the community to welcome and sustain new refugees.  Since March 11th, 2022, 130 Ukrainian have made ‘De Schilderhoek’ clinic their sanctuary.

On welcoming refugees, one Schilderswijk resident explained: “we also have our reasons why we came here”. Ukrainian refugees are welcomed with open arms by everyone coming to the aid of the new residents. “We immigrants know the pain.”

The Schilderswijk faces many challenges, many coming from its revolving door of immigrants and often-cited levels of social cohesion. But its active residents are eager to build a sense of community, one that has unique values that represent the neighbourhood’s rich and diverse history. Initiatives like ComClose can strive for finding innovative ways to tap into and support the strong communal spirit of neighbourhoods, like the Schilderswijk.