Building Trust Through Accountability in Liberia

Samuel G. Ford is the Assistant Commissioner of Community Services at the Liberian National Police, an institution that has, for the past twenty years, sought to reform after being involved in the conflict of the Liberian civil wars, one of the bloodiest in Africa. Samuel is taking the next step in building his community’s trust through accountability. 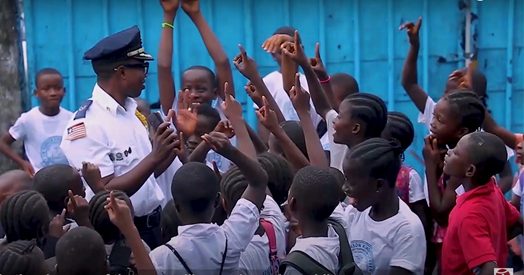 Liberians have endured two wars in recent history, with the First and Second Liberian Civil Wars marking 12 years of conflict between 1989 and 2003. Virtually all Liberians were affected by conflict, either through direct violence or through the long-term destruction of infrastructure, economic potential and civil cohesion.

Central to Libera’s long-term reconstruction efforts has been the Liberian National Police. The 2003 Peace Agreement in Accra stipulated the complete overhaul and rebuilding of Liberia’s civilian police capacity under UN authority – all to restructure Libera’s security sector, which was implicated in many of the atrocities committed during the war.

Now, two decades later and equipped with a series of legal and institutional reforms, local agents for positive change are looking to solidify the Liberian police as a trusted and responsible pillar in Liberian society. One such agent is Samuel G. Ford, the lead in community policing and community relations at the Liberian National Police (LNP).

Samuel aims to bridge the gap and foster a strong relationship between the police and local communities. He wants to give the public reasons to trust in their police by building a community-oriented police institution. To Samuel, a rehabilitated and trust-worthy police force would signify a more complete reconciliation of Liberian civil society. After all, in his own words: “There is a saying that if you want to get to know the society of a country, you should look at their police force. We are the mirror of our society”.

Last year, Samuel joined The Hague Academy’s Integrity and Anti-Corruption training, as an opportunity to choose from the best tool kits applied to different contexts around the world. “The interaction with other participants was incredibly interesting. I learned from their experiences and perspectives… in Egypt, Suriname, Nigeria, Kenya and Rwanda… I noticed many of our countries have very similar issues in terms of police corruption, mainly within my region, and I think we can solve them.”

Samuel highlights that the anti-corruption analysis tools that he picked up at The Hague Academy are most valuable to his work. From carrying stakeholder analyses to specific situations to more effectively collecting and analysing data that can lead to more data-informed decisions, Samuel feels that he has what he needs to design and implement the strategies to stop corruption within the Liberian National Police. To Samuel, these tools are essential to analyse its root causes and understand the kind of corruption involved in the Liberia national police. “We know that corruption is a symptom, it’s not that people are corrupt but the system makes people corrupt”.

A Root Cause: The Need for Accountability

Samuel understands that to build trust among Liberians toward their police force, he needs to ensure the success of policies that tackle police corruption and raise the accountability of his officers. Given Liberia’s tragic past, he is also fully aware of how difficult it has been for Liberians to once again trust their police.

“I have seen what it means to live in a country with such a devastating civil conflict… I saw police officers brutalise civilians and not being held accountable for their actions. We, police officers, have power that we can use, we have the power to use force and weapons, and that power cannot be used against the people we are supposed to protect. Now, we’re left to deal with the consequences, police mistrust…”

For years, memories of the civil war have fueled Liberians’ mistrust toward their police, which, as Samuel implies, makes instances of bribery and corruption among the police more difficult to swallow for those who wish to improve the system. Still, a nuanced understanding of his context has allowed Samuel to acknowledge his community’s grievances and implement clear anti-corruption and accountability strategies that go a long way in building trust.

Samuel’s Back Home Action Plan from The Hague Academy has materialised as the Advancing Liberia Policing Accountability and Citizen Trust (ALPACT) project. ALPACT grants citizens easy access to a system where they can report acts of police corruption, or any unethical acts allegedly committed by Liberian National Police officers at their expense – under the complete protection of the law and oversight from a Civilian Complaints Board. Inversely, the project also implements an award that encourages good conduct among police officers, further supporting behavioural change.

Taking on an integrated approach to awareness-raising, Samuel is implementing an ethically minded Training of Trainers for officers of the LNP, while conducting an awareness campaign of what constituted ‘good policing’ to the citizens of Monrovia and other regions across Liberia. Through this, Samuel hopes to establish the ‘rules of the game’ for both the police and their local communities: on one hand, lessons are shared with the LNP on integrity, anti-corruption and good conduct; and on the other, local communities receive the tools and the know-how to report police and hold them accountable. Through continued practice and iteration, Samuel is confident that Liberians can place trust in their police.

Interested in the different drivers of corruption and their impact on development? And interested to learn approaches to address these root causes? Sign up for our Integrity & Anti-Corruption Course, taking place 5 – 16 September 2022! Please note that the deadline is 29 July 2022.