On 4 June 2015, The Hague Academy concluded the Serbian training component of the MATRA CoPROL Leadership Programme for Security and Rule of Law in Belgrade together with VNG International, PBLQ, and SCTM (Standing Conference of Towns and Municipalities). At the closing ceremony, the Ambassador of the Netherlands, His Excellency L.L. Stokvis handed the certificates to the participants as recognition for their hard work. We also asked the Ambassador about his thoughts on the programme. 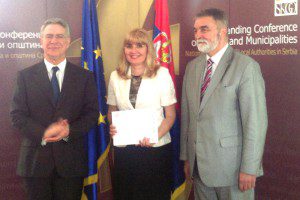 What do you think of the MATRA CoPROL Leadership programme?

The presentations from participants of the Leadership Programme for Security and Rule of Law demonstrated perfectly what this initiative is all about:  to help create momentum for positive change to better serve the citizenry and increase the quality of service delivery, improve security at the local level and promote more cohesion among the municipalities and neighbourhoods. We want to continue to encourage municipal leaders to work in close cooperation with the Ministry of Justice and the Ministry of Interior and Police.

I was greatly impressed by the reports the participants presented at the high-level panel. Here we had a group of dedicated mayors, high municipal functionaries joining forces with counterparts in the two ministries, the Police, the Police Training Center, the Anti-Corruption Agency,  the SCTM, the Judicial Academy and the Association, representatives of the ministry of Justice, the ministry of the Interior and Police.

They had worked together in the programme, and through their discussions with counterparts in the Netherlands they designed ways on how to put integrity and the fight against corruption at the heart of their work. Furthermore, they thought about ways to better involve citizens. I compliment the participants for their commitment, their dedication and I felt very privileged to hand these participants their certificate.

I was particularly touched by the speeches of State Secretary of the Ministry of the Interior Aleksander Nikolic, Secretary General Djordje Stanicic of SCTM and Advisor of the Minister of Justice Marijana Sarac for the implementation of the national Anti-Corruption Strategy. They really expressed their dedication to reform to serve Serbia and its citizens better. 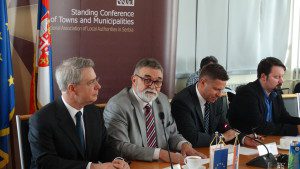 Is there anything in particular that you would like to see from the participants in the programme after they have finished their training?

I would like to ask them to keep in touch with each other by mail and social media, and to come together to discuss what change they have been able to realise when taking into account the insights they learned during this Leadership programme.

“Integrity and the fight against corruption doesn’t come easily but with increased cooperation  we can ensure a more effective way of increasing security for all citizens.”

Old ways of doing business die hard in administrations. So my hope is that by remaining in close contact, these participants will be able to better inform the public of their vision, and hopefully galvanise the approriate support for their back home action plans on which they worked for two years.

Integrity and the fight against corruption doesn’t come easily but with increased cooperation between the Ministry of Justice, Municipality and the police we can ensure a more effective way of increasing security for all citizens. This will require determination and dedication, and exchanging knowledge and ideas among the participants in the programme will be part of that. I sense the participants recognize their unique and strong mix of responsibilities. Together, they can help each other make a difference.

How is the Netherlands helping Serbia as a member state candidate to the European Union?

The Netherlands is deeply engaged in assisting Serbia in its transition to a country that meets the European standards as to the functioning of the democracy, human rights, the rights of minorities, including those of the LGBT population and the rule of law.

A country that has successfully made the transition to a market economy that can withstand the competitive forces on the internal market, a country that has accepted the European rules and legislation and has been able to implement them. Our engagement as a partner of Serbia in this endeavor is two-fold. First, as a well-informed and active member-state of the EU, including supervising and advising with the other 27 EU countries about the EU’s activities in assisting Serbia to reach its goals. We are very much engaged in formulating EU positions in the accession negotiations and will be just as engaged in the negotiations themselves.

Second, our engagement is based on our bilateral exchanges at the political and expert levels and our considerable MATRA programs, directed at societal transformation and the rule of law. We are working together with NGO’s, with ministries and many state institutions. Now, we are concentrating on rule of law.

The MATRA Coprol Leadership for Security and Rule of Law Programme is an excellent example of this, and I compliment The Hague Academy for Local Governance, VNG International, PBLQ-ROI and CILC for the excellent programme that they have designed and executed.

The Netherlands engagement through its MATRA program is much appreciated by our counterparts as the match of Serbian demand and our offer has so often proved beneficial. As a partner we are effectively contributing to a successful transformation, and that is in the interest of both our countries and the citizenry, to ensure security, stability, the rule of law and a level playing field for sustainable economic growth for us all.

The Hague Academy and the Netherlands Helsinki Committee are now accepting applications for two Matra Rule of Law Trainings on “Integrity of Civil Servants” and “The Administration of Justice”. The deadline to apply is 7 January 2018.