Gender and Good Governance in Zanzibar

The Hague Academy crossed borders this time to deliver a training in the tropical paradise of Zanzibar in December 2013. The Zanzibar Institute for Public Administration (IPA) had requested a blended training about gender and good governance in public service delivery with training of trainers (ToT) components for their entire staff. Five key IPA staff members, including the director, registrar (head of curriculum) and coordinator first travelled off to the Netherlands from 2 to 6 December for a training in which they were exposed to the local practice and best practice of service delivery in the Netherlands.

The study visits left the biggest impression behind as the group experienced the core of Dutch pragmatism. Visiting the waste collection, separation and recycle site of the Hague Municipality, the special relationship between the policy department of the Municipality on waste issues and the actual delivery of this service by a private company who works for profit were clarified. 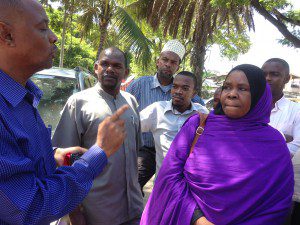 The group of five shared this experience in the second week in Zanzibar, when the same visit was conducted with the entire group, where Mr. Rajab of Zanzibar Municipality explained the limitation and challenges they face in collecting the waste, let alone recycling it. “Awareness raising is our greatest goal,” Mr. Rajab explained. “People should know that we all benefit if waste is not just thrown in the streets and public spaces. We create other problems with that, mostly affecting the health of the people of the island”. Though it’s the job of the municipality to educate the people on how to handle their waste, limited resources and funding of the municipality are additional challenges, affecting this service to be delivered adequately.

Another component of the training was gender in service delivery. Women and men are users of services, but sometimes have different needs, demands and priorities. This also goes for the case of Zanzibar, a traditional Islamic society which has transformed immensely in the past decades. Where women were barely visible in the public 100 years ago, now they are an essential part of economic activities and the public domain. During the training, it was pointed out that local governments have a lot to offer in achieving gender equality by delivering services that match the needs to the demands. The IPA staff participated enthusiastically in a gender sensitizing and gender mainstreaming workshop, which led to an open discussion and sharing of ideas and plans on how to bring out change.

The two training weeks were a fantastic experience for The Hague Academy and the Zanzibar Institute for Public Administration who share the same goal: to strengthen the capacity of local governments.

In September 2014 we also organise an open two-week training course on Local Service Delivery in Land and Water. If you are interested to participate you can find more information here.